Metal Church are a heavy metal institution whose appeal to seriously dedicated hard rock and metal fans is well known. The outfit has certainly endured more than their fair share of trial and tribulation, however, when a new album, released some 38 years after the band’s formation, packs as mighty a punch as Damned If You Do, maybe some of those obstacles have been the catalyst for what is certainly a mighty heavy metal offering.

Mike Howe returns as the bands vocalist in 2018 (’89- ’96; ’15- present), much of the band’s resurgence is due to his tremendous performance across Damned If You Do. Iconic guitarist and songwriter for the band, Kurdt Vanderhoof, plays to the strengths of Howe by crafting epic metallic soundscapes that should give the up and coming bolters such as Powertrip a real run for their money.

That final point is important. Much like bassist John Mako’s comrades in Fifth Angel, releasing a strong album isn’t enough, these days or in any era really. To guarantee that the ‘right’ audience will hear a remarkable release the marketing and promotion needs to be on point. This is a question that was recently posed to vocalist Howe and this is his response.

“It’s a difficult thing in this day and age with the internet and all that. On another personal note we are very grateful to be able to be able to still write and record albums in our 50’s and get them out. We do have families and home life responsibilities that we have to take into account as well. So, it’s not going to be like we could get out on the road like a 20-year-old with no responsibilities and just play 300 shows a year and try to do it that way. We can only rely on our record company, which we are totally happy with, Rat Pak Records in United States, they’re working their asses off to do their best on those platforms you’ve mentioned (Facebook, Instagram, Twitter etc)

Other than that, I personally don’t know, being a 50 something year old guy who’s out of touch with the business per se because I have my home life… I believe that they’re (Rat Pak Records) doing the best job that they can and I fully believe in it. I’m very grateful to wrap that and we will just have to hope that the Gods of metal will shine down and maybe it will catch on, right?”

Indeed! I’ve mentioned in a review elsewhere on this site that heavy metal fans have tendency to focus on the past and to reimagine the importance of some bands and albums. It’s a trend that I’d enjoy seeing the back of given the sterling material many bands are offering in 2018 and beyond. Metal Church are a great example of the point and are one of a cohort of legacy artists setting the benchmark for their careers in this era.

“It comes from the heart and soul… we don’t contrive our music, we don’t overthink it. It’s just a basic process that Kurdt and I have always gone through the same way, when you get inspired by certain things. Kurdt goes in and plays in front of me and I get up in front of a microphone and I scream out, what comes out, then we just try to keep it natural and authentic and see what happens. I think that’s what artists, you know, what we tried to do anyhow. It’s true for my heart and we give it all we’ve got and that’s all we can do.

Sometimes as an artist, you hit a home run and sometimes triples, sometimes you get off, you know, but we just worked at it and had fun. We don’t really overthink it and we, like I said, we try to have as much fun as possible during the process and not make it a chore. We know when it starts becoming a chore within the writing process, we move on and leave that song behind, we don’t beat it into the ground. We move on until we’re excited and happy about something. And that’s basically the process. I think it really works well for us.”

Those are the fine reasons Howe offers for the strength of the material across Damned If You Do. Check out the album via the link below.

Damned If You Do is out December 7th 2018. Pre-order link via itunes here. 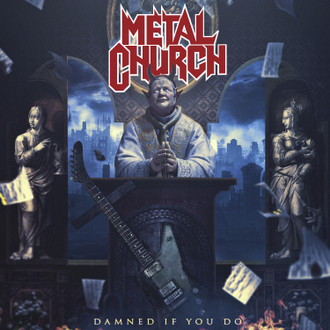 Damned If You DoMetal Church

Dream Theater boast an exceptional cast of musicians, one of the bands members has been …