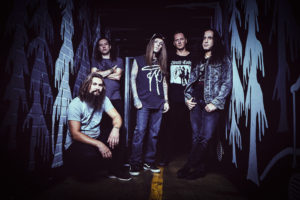 Henkka Blacksmith is the bassist from Finnish melodic death metal outfit Children of Bodom, he is performing promotional duties as the band have just released Hexed, their 10th full length studio offering.

Hexed features all of the characteristics that have endeared fans over the globe to the band’s music; 80’s style guitar chops against a snarling death-vocal, outstanding musicianship, and choice melodic phrasing that would suit a Pink or Gwen Stefani tune.

Blacksmith said Hexed is a continuation of the band’s previous work and they had more time than ever before to compose its material.

“The album itself, we did it the same way we have always done it so there was no special direction or perspective, we just did it,” said Blacksmith.

“We actually had a little bit more time to compose the songs and it was actually the first time ever that we went on tour in between the (song) writing that we had.”

That tour was a two-month celebration of the bands 20th anniversary which gave fans an opportunity to hear cuts from early in the bands career.

Despite Hexed containing all the elements fans have come to expect, it was put to Blacksmith that his bass could have been turned up in the mix to showcase his obvious talent behind the four-string.

“We just want to get a perfect mix, then the levels are what they are,” said Blacksmith.

“I’ve been lately very happy with the sound and with how the bass actually comes through (because) if you listen to the first album, it’s almost like, you know, “…And Justice for All”.

“The more experience I get the wiser I become… I found my place in a way and I think I’m more comfortable nowadays with the bass compared to the first few albums.”

The 20-year anniversary of Children of Bodom is a milestone event considering the band were founded during heavy metal’s commercial nadir; the 1990’s.

Talking about career longevity, Blacksmith said it would have been ludicrous to think the band would still be going all these years later after the release of their debut, Something Wild (’97).

“No of course not, that would have been ridiculous… when I first joined the band the dream was to get a record deal and then that happened,” said Blacksmith.

“The record deal was actually three albums, I was like ‘what the fuck? Three albums? How are we gonna be able to do that?’.

“I remember clearly how I felt about the first deal with the three albums and then everything else is just way beyond anything I could imagine.”

With talk returning to tours and far-flung places, Australia is on the bands radar however as Blacksmith alludes, financial constraints rule the industry.

“It’s been always very, very nice… it’s long way and you have to combine it with other markets somewhere nearby (such as) Japan and Southeast Asia,” said Blacksmith.

“It’s quite hard to come and play shows there because it’s so expensive for us which is a sad thing but always when we went there it’s been super nice.

“I really hope that we can get some shows (in Australia) on this cycle too.”

Hexed is out now via Nuclear Blast.

Griff Dickinson is the vocalist in the U.K.’s djent inspired metalcore crew, Shvpes. The band’s …