Sweden’s mighty mid-paced metal gargantuans Grand Magus have a new album called Wolf God to share with their horde of fans and listeners.

Janne ”JB” Christoffersson is the bands frontman, vocalist and guitarist and was available to answer questions about the album.

Christoffersson said the album was an opportunity for the band to take a risk as the song writing was completed prior to entering the studio.

“We took a bit of a gamble this time, which wasn’t really a gamble in the end, but we decided to do it properly this time like we did on the first album,” said Christoffersson.

“(We) put in all the writing and all the work before we went into the studio to start recording and that meant that the actual recording went really quickly.

“Since we were rehearsed and we had made all decisions… we just recorded takes rather than, you know, doing drums and then doing guitars and then doing bass and whatever and I think it gave the album more groove, more dynamics and it was just a very fun recording this time.

“In the past, fun is not the word I would use to describe what we’ve been doing and hopefully that comes across in the end result.”

Wolf God is Grand Magus ninth studio offering and if it follows the progress of albums released after 2010’s Hammer of the North chart success is assured.

Commercial success and mainstream attention aren’t typically associated with heavy metal outfits however Christoffersson and Grand Magus have carved their own niche in a crowded music and entertainment industry.

Christoffersson said there have been many times where he has caught himself marvelling at the probability of the bands success and their versatility in keeping things together.

“There’ve been many things in my life relating to what you are saying now, ‘is this actually happening?’ but I think for good and for bad humanities best abilities, the ability to adapt… so you adapt to people liking what you do,” said Christoffersson.

“I mean, like you said, when I was 15 to look back now and think that I’ve actually played with some of my absolute idols, you know, is it’s unbelievable. It’s unbelievable.” 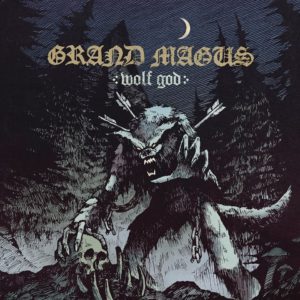 Frank Bello has been the bass guitarist on every Anthrax album since 1984. Aside from …