INTERVIEW: Marco Aro from The Haunted

The Haunted were the band that kicked off the nouveau-thrash movement in the late 90’s with their self-titled debut.

Finish national Marco Aro replaced that album’s vocalist Peter Dolving, in time for the album that truly set the bar for the genre in the years that followed; the blistering Made Me Do It (’00).

The affable Aro is certainly looking forward to the band’s appearance alongside At The Gates and Witchery during the Australian run of shows that are almost upon us.

He said it was a blessing to be able to tour Australia as there was a time not long ago the pressures of touring took their toll.

“Since we got back together in 2013 and we started this format of The Haunted we decided that we’re not going to do the extensive crazy touring that we used to do because that pretty much burnt us out,” he said.

“That’s why I also left the band and also had drug addictions and stuff. But those are also like… results of that way of life, so we decided that we’re going to do quality before quantity and Australia is definitely quality!

“Then I also get to travel with all three bands, which have known each other for 20 odd years… it’s like a grownup day-care centre.”

Before Killswitch Engage were credited as the band that broke the back of nu-metal, The Haunted likely inspired young hands to pick up the guitar and eventually craft what is now the ubiquitous metalcore genre.

Alongside Blink-182, whose pop-centric choruses are married to the vicious verse-then breakdown combination that is a signature of The Haunted’s thrash metal, Aro and his comrades may well be credited with helping craft the metalcore genre.

Aro however is modest when offered such lofty praise, he said he understood that some bands were important to inspiring genres, yet he wasn’t in a hurry to pat himself on the back for such an accolade.

“I had albums like that that were just as important to me, like Reign In Blood (Slayer– ’86) and some Dead Kennedys albums as well because I’ve always steered my ship towards hardcore,” he said.

“Metal was always there as well. But I always turned a bit more to hardcore.”

Tickets: On Sale NOW! From: www.hardlinemdia.net 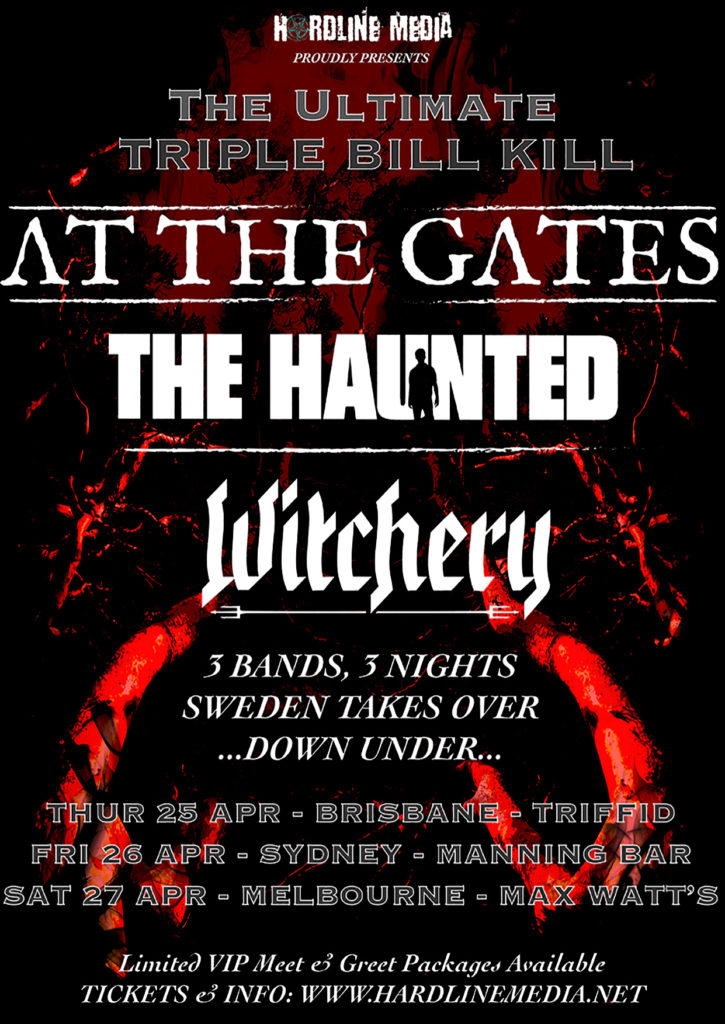