Two of Australia’s most iconic bands are back again for one last time with their double-barrelled catalogue of hits and classic songs!

After two years of National touring as one of the best double bills 1927 & Pseudo Echo are teaming up for one final series of shows!

No Australian music fan can ignore or deny the impact of these two bands on our music psyche. Between them they share a catalogue of songs that are still heard on Australian radio and have accumulated awards and accolades along the way.

1927 formed in 1987 and went on dominate charts with songs such as That’s When I Think Of You, If I Could, Compulsory Hero and Tell Me A Story – all of which were on the multi-platinum selling debut album ISH.  ISH went on to become the highest selling debut release by an Australian artist and won two ARIA Awards – Best Breakthrough Artist – Album and Best Breakthrough Artist – single for That’s When I Think of You. The video for Compulsory Herotook the Aria for Best Video at the 1990 awards.   They continued to release music into the early 1990s before disbanding in 1993.

PSEUDO ECHO were one of the biggest Aussie bands of the 1980s and influenced a generation of Australian musicians with their synthesised rhythms and dance beats.  Their debut album AUTUMNAL PARK (released in 1984) featured hit singles Listening and A Beat For You, followed in 1985 with LOVE AN ADVENTURE and the singles Don’t Go, Love An Adventure, Living in a Dream and the massive #1 single FUNKTY TOWN.  Funky Town was also an international success – peaking at #6 on the US Billboard Singles chat and #8 on the UK Singles chart. 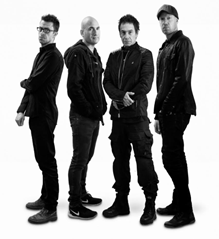 ROYCE 5’9” is headed to Australia for his first ever headline shows! So what’s an …

Due to issues beyond the bands’ control, involving complications with VISAs for the Japanese leg …