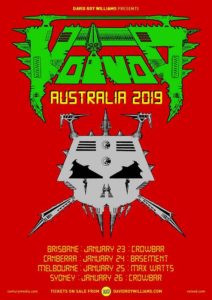 To say I was excited to witness Canadian Progressive Thrash legends Voivod in this country for the first time since 2000, is an understatement. I missed that tour, when they visited as a three-piece with Eric Forrest on vocals/bass, the mighty Denis ‘Piggy’ D’Amour (RIP) on guitar and Michel ‘Away’ Langevin on drums. A lot of water has passed under the bridge since – marked by a couple of break ups, utter tragedy in an untimely death and a resurrection of sorts with Ex-Metallica bassist Jason Newsted joining the band along with original vocalist ‘Denis ‘Snake’ Bélanger in 2001. On the release of ‘Infini’ after the passing of ‘Piggy’ in ’06, the bands end was envisioned. If someone had told the band then, that they would be touring Australia in 2019 on their 35th Anniversary tour, they would have thought you were mad!

Incredibly, with the addition of Dan ‘Chewy’ Mongrain as a live guitarist replacement in ’08 and then helping on fleshing out ‘Piggy’s’ final recorded riff ideas for the ‘Infini’ album, it seems the band had found a most worthy, almost clone-like guitarist to fill some very big shoes. Since that time, we’ve seen 2013’s ‘Target Earth’, 2016’s Post-Society EP (with new bassist Dominique ‘Rocky’ Laroche) and late last year, album No.14 ‘Wake’. And from what a small but very loyal contingent of fans witnessed at Brisbane’s Crowbar venue, it appears that Voivod are stronger than ever!

Now in its 5th incantation, this Voivod line up has now solidified into a well-oiled, finely tuned thrashing machine. As veterans in the Metal game, celebrating 35 years as a band, you could forgive them for, perhaps, resting on their laurels. However, from the throbbing bass intro and staccato riffage of lead off track ‘Post-Society’, this couldn’t be further from the truth. The energy they conveyed and chemistry the band had with each other was a joy to behold. ‘Away’ looked positively thrilled to be here as he pulverised his kit, whilst ‘Rocky’ and ‘Chewy’ writhed, jumped and banged with pure abandonment. And Snake…wow, Snake! One of the more distinctive vocalist in this genre, his presence, his vocalising performance was, after all these years, at the top of his game.

With 35 years and 14 albums under their belt, song choice options proved both a blessing and problematic for the band. What do you leave out? Well, the Eric Forrest period was ditched for starters as was anything from the last couple of ‘Piggy’ albums. This could only leave the bands ‘early-classic’ period and current ‘Wake’ material as possible choices. So when you get highlights from ‘Killing Technology’ (Ravenous, Overreaction and Order of the Black), ‘Dimension Hatross’ (Technocratic Manipulators and Psychic Vaccum) and ‘War & Pain’ (Voivod’) well, you could have ended things there! Pulling from ‘Nothingface (Astronomy Domine), Angel Rat (The Prow) plus current ‘Post-Society’ and ‘Wake’ releases, the set list was eclectic and varied. A personal highlight was a superb version ‘Lost Machine’ from ‘93’s The Outer Limits – THAT riff and jazzy, prog-crazed mid-section along with Snake’s impassioned vocal delivery made it a standout!

I love the Crowbar as a venue; small, intimate and dungeon like, the sound mixers never fail to get it right and once again they did a killer job in capturing Voivod’s idiosyncratic vibe. This was especially so with ‘Chewy’s guitar work. What a tone that guy has! ‘Can play’ is something that many a punter was mouthing when witnessing his frenetic yet fluid fret work. He, along with Rocky and Snake regularly engaged with their loyal audience, feeding off their energy – handshakes, high fives, fist pumps, pick throwing and audience vocal participation was the order of the night. Despite the small turn out, the entire band left to rapturous applause after a killer set with each and every member displaying true appreciation for the reception they received. Easily one of the most respected metal bands on the planet, I would suggest you not miss their next trip to this country!

I must make mention of the two local support acts – Brisbane’s own Wartooth and Asylum! Like the last time is witnessed them supporting Destruction, the Asylum lads once again nailed their Old school Thrash set with great aplomb and it was great to hear a new track from their forthcoming debut album that is currently being written. Watch this space, there is more to come from Asylum!! Wartooth also upped the ante with their hyperactive, energy laden set, even pulling in their own local following for the gig who had the band eating of their hands. I just wish there were more people there to see both support acts. 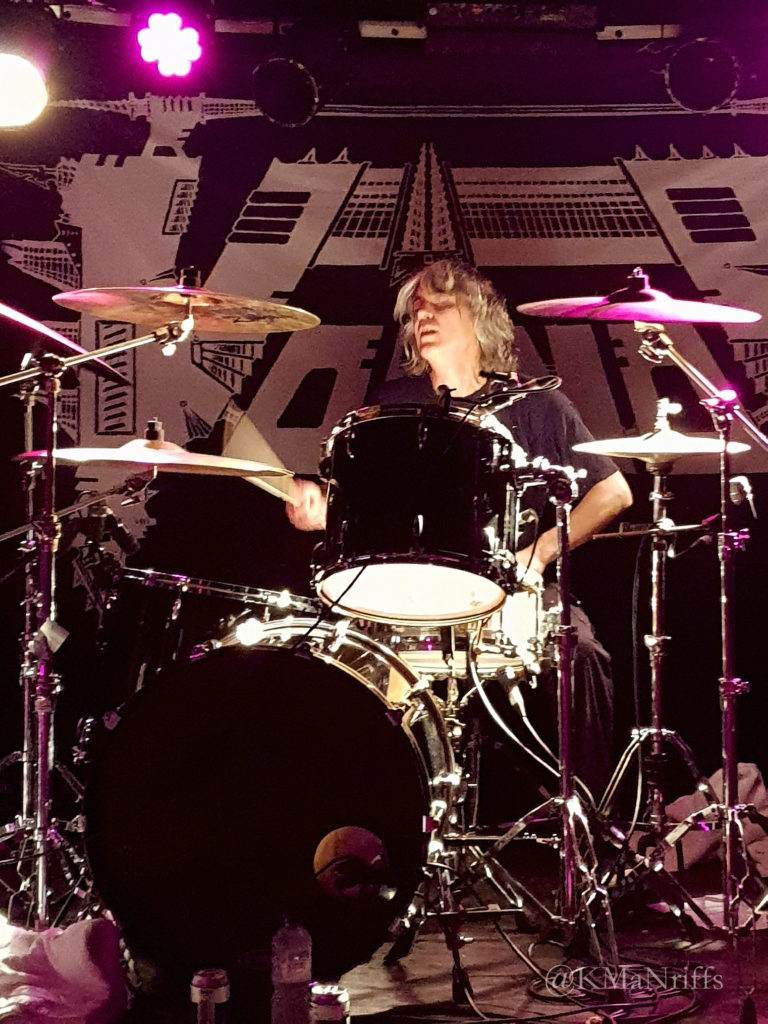 The provocative, eccentric, criminally under-rated Aussie battler Kirin J. Callinan is back with his first …