Brisbane three-piece feel-good stoner-rockers Dune Rats have released their heavily nostalgic, hands in the air, belter, No Plans. The tune is the band’s first effort since their wildly successful sophomore album, The Kids Will Know It’s Bullshit.

Danny Beusa (guitar, vox), BC Michaels (drums), and Brett Jansch (bass) return to the scene with a projected future fan favourite. No Plans triggers nostalgia upon its initial beat. Unabashed stoner-pop riffs ring out into some simplistic and effective lyrics embracing the no fucks given attitude as practiced and displayed by the band. “Talking No Plans, playing in a band/It’s too much for them, to even understand.”

Hit with some nostalgic and familiar power chord driven melodies, No Plans has a contagious chorus. “Hanging out with all of my friends. Sleeping in the back of a van. Waking up and do it again.” They’re not poets. They don’t need to be. Underlying themes of rebellion and tackling immense doubt, encapsulates the minimalistic lyrical appeal of No Plans.

The second verse boasts a different timbre to that of the first, relying on a driving drum beat, minimalist bass line and subtle guitar embellishments. “Still got no clue, what the hell to do/ Same old question’s explanations.” Rings out before dropping into a second chorus, same as the first.

Breaking down into a brief acoustic guitar and bass driven interlude, smashing pumpkins-esque guitar embellishments are introduced before dropping into a bridge reminiscent of a stoned Weezer. Prior to dropping into a finale third chorus, Beusa puts the doubters to rest, “Tell me what your plan is. What the hell you asking for?” The end of the tune sees the Dunies boys jam out in an utter conquer to the crippling doubt and falsely driven sympathisers they despise.

Feeling more nostalgic then any cut off the band’s last effort, while equalling the same concentrated stoner-pop-punk production, No Plans is easy to enjoy. Switch off, trigger your inner 18-year-old, crack a tinnie, ring a mate, enjoy all the sounds we know and love.

No Plans – Dune Rats. This is a solid tune. 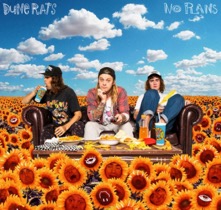