Swedish visionary metallers SOILWORK have released a brand-new song called ‘Feverish’. The song is being made available digitally along with a new version of their last album’s hit single,‘Stålfågel’, featuring ARCH ENEMY singer Alissa White-Gluz.

Commented the band:
We have all been feverish. We have all sometimes given in to the temperature rising inside of us, being ridden by a ghost that made us do things we didn’t want to do, but it somehow felt good afterwards, like a purging of the mortal organism that confines us.

Some people say that our bodies were originally designed to have a higher temperature. That when humanity first evolved our bodies were constantly feverish, the warmth subduing our control mechanisms and the neuroutic, nervous behaviour we seem to be so prone to these days. And that might be one of the reasons we were able to proliferate and conquer the world. and subdue its natural inhabitants.  Perhaps it’s time to let go again, to unleash the fire still burning within us, biding its time and still hoping to one day be able to take over?

SOILWORK, the metal band that should all be dead by now, have felt their temperature rising for a while, Some say that they’ve even become a bit reckless. There’s even been a quote from one of the band members saying, on tape, ”F**k the consequenses”, and when asked to elaborate, he just said ”I’m feverish”, and disappeared.

So, while the background and and motives are a bit sketchy, and the band seems reluctant to reveal too many details, SOILWORK will be releasing »The Feverish Trinity«over the next five months, a trilogy of songs with accompanying videos that, according to Soilwork, will ”celebrate the Babylonian Death Goddesses that once made the world a more Feverish and exciting place”.

‘Feverish’ follows the band’s globally acclaimed new album, Verkligheten (album of the month inMetal Hammer, Rock Hard, Aardschok and Scream), which was released in January as well as the incendiary Underworld EP which dropped recently. 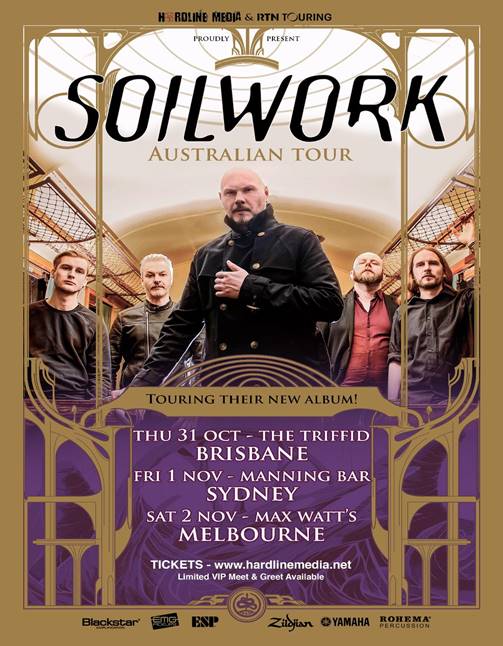