REVIEW: The Mountain Goats- In League with Dragons

The Mountain Goats have 25 years and seventeen albums under their belt. Their 17th effort In League with Dragons is the outfit’s fifth album this decade and reminds us of their signature underground folky instrumentation, front-man John Darnielle’s unmistakeable voice and some differing instrumental territory.

I can understand the rock opera perception surrounding the album, I personally perceive the album as more of a narrative with multiple characteristic mindsets. The album feels very inconsistent as the chapter like changes can be jarring and there are noticeable breaks within the narrative throughout the track list.

Opening track, Done Bleeding embosses an 80’s, almost Police like timbre. Invoking nostalgia through both a familiar sounding voice and instrumentation, shimmery textures glimmer in the distance of Mountain Goats’ signature sound. While the lyrics document a touching and tortured tragedy of a progressive decline into hopelessness, the vocals are by no means in your face and the message is lost throughout an arguably long-winded an unmemorable cut. The lyrics are some of the best on the album, “Take a picture or two/Just to remember the view/Leave a mark on the door/As an empty warning sign/From one who’s gone before/But isn’t here anymore.”

Second track, Younger embosses some effective double bass tones initially, but the vocals are again low in the mix. One of my favourite cuts from this record is the second half of this tune. A manic saxophone solo really rips and proves to be an unexpected and necessary breath into the albums start.

The by far worst track on this album is Passaic 1975. Coming in at third on the track list, the narrative is made a joke of before it even gains momentum. Some meaningless lyrics add to the tracks dismay, “New Gibson SG, inlaid with pearl/Tonight Passaic, tomorrow the world”. Add an in-convincing Darnielle and some stale, shitty accompaniment, I wish this track wasn’t on this album.

Clemency for the Wizard King is the first glimpse of contrast amongst a relatively similar introduction. The bass sound completely opposes that of the prior, and a glistening electric piano serves as a notable highlight throughout the track. Lyrics tackling communal like training start to direct the narrative of the album, “We who train in the way of the blade/We who sleep in the accursed glade/We’ve come before you now”. One of my favourite cuts on the album.

Followed by another favourite cut, Possum by Night provides further contrast and an underlying energy in a rather tamed track. Easily the best executed track on the album, the percussion is ace, voice is higher in the mix, narration feels purposeful, and lyrics are class, “Once more unto the breach/Safe in the spots that the light can’t reach”.

Title track, In League with Dragons is pretty forgettable. Nothing notable to hold onto throughout the tune. Country guitar provides some contrast, and the lyrics add to the overall album narrative.

Doc Gooden has one of my favourite moments on the entire record when the twangy acoustic guitar plucks a catchy and suitable re-occurring melody. One of the only tracks where I enjoyed the single idea progression technique employed across a lot of the album. Chorus is catchy. Slightly long-winded. Completely abandons all album narrative.

Going Invisible 2 is another favourite cut of mine, embossing some shimmery textures, synth swells, fitting organ part, and a solid evolution. Around the two-minute mark the song captures this second wind and a feeling of space implies intensity as Darnielle barks, “I’m gonna burn it all down today”. Strong point on the record.

Waylon Jennings Live! completely abandons album narrative again, but I can’t help but enjoy this song. Themes of gambling, alcohol, and drug use are humorously scattered throughout the tune. The folky instrumentation feels more concentrated then in previous attempts. Guitar solo is fuckin mint. Encompasses The Mountain Goats.

Cadaver Sniffing Dog feels like evolution. Instrumentation isn’t anything we haven’t already heard, but the chorus opens up in a very enlightening way, and the story is a cool concept. “Stray clumps of hair and blood and brain/Fragments of bone in the drain/Rookies trying to keep the airway clear/But the damage is too severe”. Instrumentally, the synth work is awesome, electric guitar solo if nothing else provides contrast, mood juxtaposition between chorus and verse is commendable, and the background vocals towards the track’s end serve as the best use of them in the whole record.

An antidote for Strychnine embosses some deeply tortured lyrics and concepts narrated through a confined character. Touching on hopelessness and inevitable doom, the track’s lyrical content is the closest to that of the opener throughout the whole record, “Call up my teacher in Cambridge/See what he remembers/Throw white phosphorus in the fireplace/Look for clues in the embers”. Further elaborating on the previous electric piano the tune is one of my favourite cuts from the record.

The final track, Sicilian Crest feels like a conclusion. Further elaborating on the 80’s like synthesizers scattered throughout the record, in addition to the folky instrumentation, the tune really feels like a combination of all instrumental timbres throughout the record. As the tune progresses a lot of the folk instrumentation poetically dissolves. Positivity riddles the lyrical content of the last track and freedom is a primary theme. “Sacrificial victims out of their cage/Smiling as they’re taking the stage”, serves as one of many examples. The track is a good closer.

In League with Dragons – The Mountain Goats. This is an album. 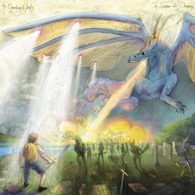