The SHIT TINNIES will release their new single ‘Point to Prove’ on 25th May via Riot Records (part of the Golden Robot Global Entertainment Group), the follow up to their recent single ‘Town’. 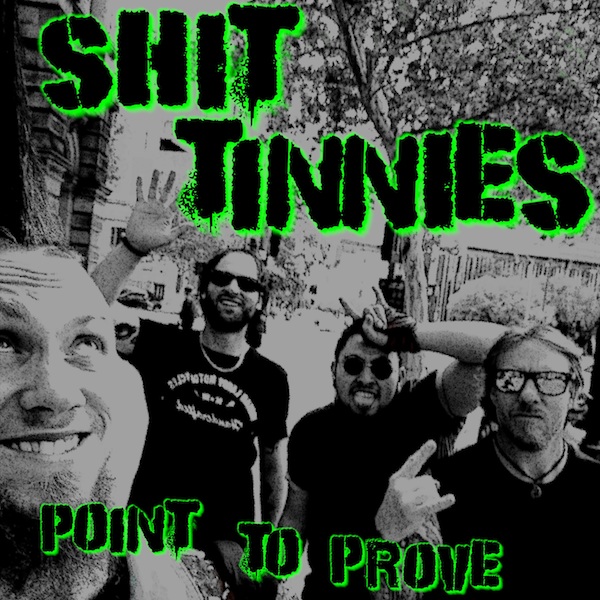 ‘Point to Prove’ is an edgy 70’s punk track with both metal and ska overtones, and in classic Shit Tinnies fashion, it’s also boosted by a truck load of attitude.

The future holds many things for SHIT TINNIES; as their energy on stage, and grit on record gains momentum with every stride, they show no signs of easing up the pressure.

ABOUT SHIT TINNIES:
Even though they are based in Sydney Australia Punk act SHIT TINNIES, Introduce themselves to the dim-lit room of half-cut punters as “The Kiwi, the Brit, the Serb and the Canadian”, it’s impossible to mistake SHIT TINNIES for another band. From the Brit’s gigantic Mohawk hair to the Serb’s Adidas sneakers, the Kiwi’s denim and piercings to the Canadian’s sleeves of tattoos, Shit Tinnies look and sound like they came here to drink you under the table.

SHIT TINNIES started out as a conversation between buddies James and Braydin “Hey, why don’t we start a punk band and play some gigs?”. Joined soon after by Stefan Radulovic on bass and Ryan Powers on drums, they began a cycle of songwriting, rehearsal, and relentless partying, before taking the stage bleary-eyed in 2018.

SHIT TINNIES are a whirlwind of punk rock, ska, hip-hop and everything in between. Exploding onto the Sydney scene in early 2019, they proved themselves to be a barrel of laughs with every show, before recording their first EP in a goddamn shed! After releasing their debut record through Riot Records, they gigged incessantly before embarking on their first Australian tour.

And now, after recording their upcoming second EP, they are back with more fight, more passion, and a few more shitty jokes up their sleeves. Tune into Shit Tinnies on any online streaming service, get following them on social media, and – most importantly – head down to one of their gigs for a hell of a good time!

he unstoppable DEVILSKIN unveil CORRODE, a monstrous new video, single and details of their long-awaited …