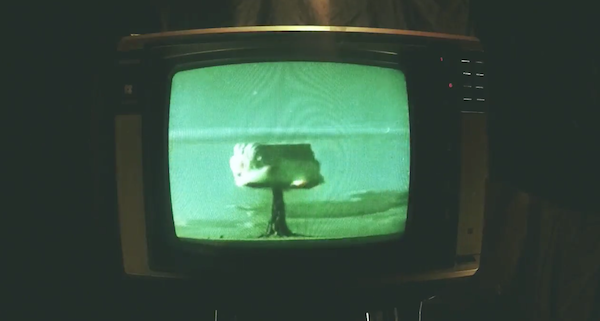 It was filmed and directed by a good friend to the band, Michael Stifter, after Mat Robins called on the morning of the shoot asking for help, “And luckily he basically took over the shoot!” laughs Robins.

The idea came about after the band found an old tv and red chair on the side of the road on the way to a gig one evening.

“We found them and were like “what can we use this stuff on?!” They ended up helping create the concept of the video which fit the song perfectly,” says Robins. “The young girl in the clip is also on our album cover so she was the perfect choice. We had a blast making it.”
Shot in an attic, the music video shows how the TV’s in our homes influence us by showing what the media wants us to see.

“Do we have any say or don’t we?” asks Robins. We’ll leave you to answer that question.

ABOUT CICADASTONE:
Melbourne based four piece Cicadastone deliver music that packs a punch. With an old school 90’s influences and a slick modern edge, Cicadastone have found their own space in the grunge rock genre. Formed in 2013 by founding members and brothers Mat and Mark Robins, they have spent the last few years honing their sound and live show, as well as constantly writing and releasing quality music.

In 2016 Cicadastone released their debut album Chance Collide. A bold statement and an impressive first release. Songs like Drown My Hopes, Forgotten Fears, Oh Satellite and Headlights On showcased Cicadastone’s song writing maturity and diversity. Sonically the album holds its own on an international level.

2019 saw Cicadastone sign with Golden Robot Records to release their highly anticipated second album titled Cold Chamber. It’s an album that continues to push the grunge rock boundaries and a natural progression forward for the band. They’ve developed their own unique sound while staying truly authentic to the genre, a difficult task in a time when it’s all been done before.

Cold Chamber is currently slated for release in late 2020 due to the coronavirus pandemic crisis. No matter what, when it does eventually drop, an excellent response is anticipated, setting up an incredible ride for the band.

Norwegian death metallers CADAVER, are proud to announce they have signed to Nuclear Blast Records. …