When the Sydney Band Together event ran in December 2019, it followed the catastrophic New South Wales fires of November and December which had a disastrous effect on local communities and wildlife. Things did not improve with the well-documented fire situation and devastation in Victoria across the back end of December and into January 2020. Silverback Touring is proud to present the Melbourne edition of Band Together and have put together a stellar line up of Australian rock talent, all lending their hand and voice to the event on the Australia Day Public Holiday on Monday 27 January, at Stay Gold.

Headlining the event are Melbourne heavyweights, Palace of the King who will be joined by Bad Moon Born (Sydney), Echo Del Tusker, The Radio Sun, El Colosso, Cicadastone, The Credits, Shadowqueen, Atomic Riot, I Dunno as well as local rock DJ’s Paul Miles and Kellin in the Name. The day-long event kicks off at 2pm and ends at 11pm. Tickets are $30 with all proceeds being donated to Victorian Wildlife and the Country Fire Service. 100% of proceeds will be donated.

The Sydney event raised in excess of $15,000.00. It is now Melbourne’s turn to come out, rock out and support a worthwhile cause on a day when the Aussie spirit is as present as ever.

Tickets are available from: https://www.eventbrite.com.au/e/band-together-melbourne-charity-concert-bushfire-appeal-tickets-88623993751 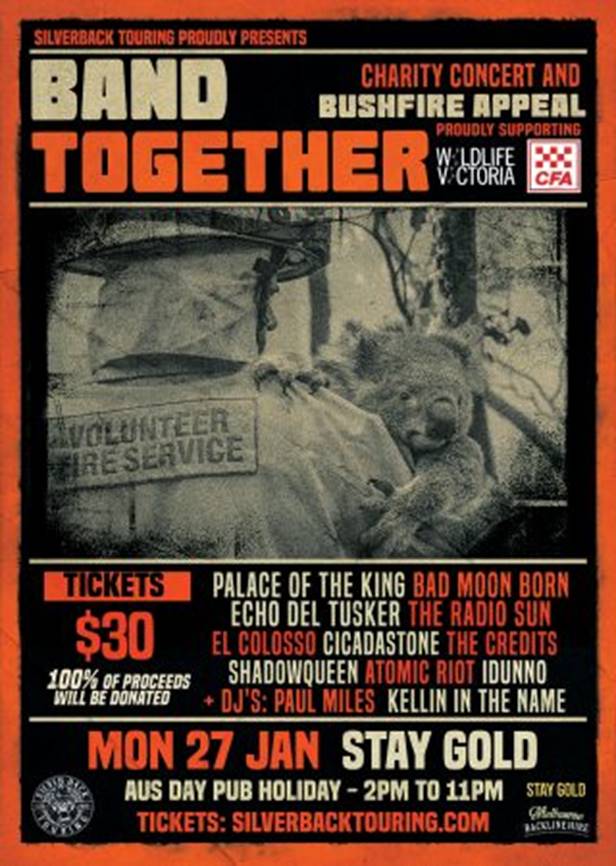