Tonight The Stars Revolt! has sold over 1,000,000 copies. With cyberpunk imagery, catchy riffs, funky beats and rap rock vocals, POWERMAN 5000 bridged the gap between Nu Metal and Industrial Metal and packaged it up in a retro-science fiction b-movie aesthetic that separated them visually and musically from their peers. Lead single When Worlds Collide appeared on the soundtrack for hit video games like Tony Hawk’s Pro Skater 2, Twisted Metal and as the lead theme for 2004’s WWE Smackdown vs Raw. The album boasted a guest appearance from PM5K Frontman, Spider One’s older brother, Rob Zombie, on the track Blast Off To Nowhere and featured DJ Lethal from Limp Bizkit on a cover of The Cars’ classic, Good Times Roll.  Tonight The Stars Revolt! was an album that simultaneously defined late 90’s pop culture as well as stood out on its own and has a timeless appeal that sounds as catchy and fun in 2020 as it did over 2 decades ago.

The uber-talented supervillains of the Heavy Metal scene POWERMAN 5000 bring their trademark “high energy fun and good times” to Australia to Celebrate the 21st Anniversary of Tonight The Stars Revolt! playing When Worlds Collide, Supernova Goes Pop, Nobody’s Real and more from the album plus other Hits – Bombshell, Super Villian, How to be Human etc.

‘’Powerman 5000 put on a hell of a show you won’t want to miss… can really get a crowd ramped up, wanting more!’’ (Soundcheck) 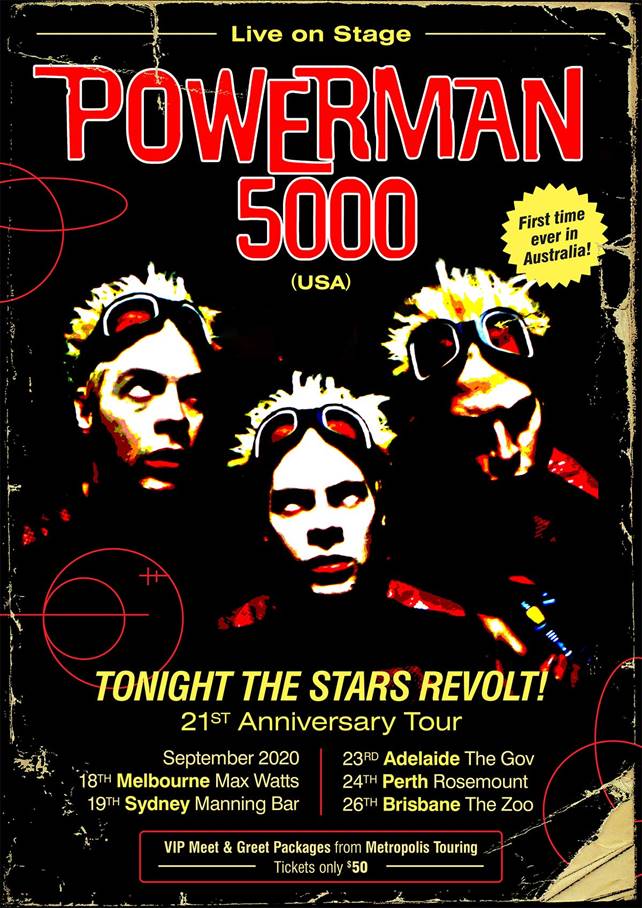 The legendary Rhapsody alumni Fabio Lione and Luca Turilli have re-united at long last, and …

SKILLET lets their music speak the loudest. That’s how the quartet has cemented its place …