no-man have just released their album Love You To Bits – their first album in eleven years via Caroline International.

Producing a cinematic Art Rock music with diverse influences drawn from Dream Pop, Prog Rock, Post-Rock, Mimimalism, Electronica/Ambient, and Chamber Jazz, no-man is a British band formed out of the creative partnership of Tim Bowness and Steven Wilson, who met and began writing together in the Summer of 1987.

A gloriously ambitious statement unlike anything in no-man’s back catalogue, Love You To Bits consists of two connected , ever evolving 20 minute long, five-part song suites (Love You To Bits and Love You To Pieces), the album combines shimmering pop and pulsating electronica elements and aspects of fusion, ambient music and much more.

Twenty-five years in the making and lyrically chronicling the aftermath of a relationship from different perspectives, Love You To Bits features poignant melodies, big beats and breathtaking solos that collide with ethereal textures and bold experiments to create the most dynamic and diverse no-man release to date.

Adam Holzman, David Kollar, Ash Soan and the Dave Desmond Brass Quintet guest. Produced by no-man, Love You To Bits was mixed by Bruno Ellingham and mastered by Matt Colton. 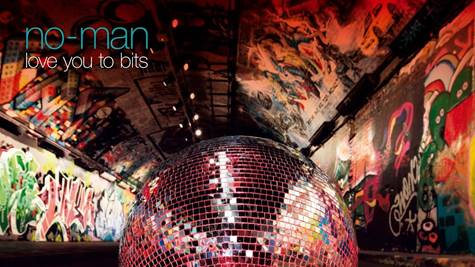 Praise for Love You To Bits

“It all flows beautifully, a career peak 30 years after no-man’s debut” Mojo

“Love You To Bits is a compelling listen.” Record Collector 4/5

“Manages to convincingly combine both euphoria and pensive reflection. It sounds like little else around…” Electronic Sound

“A fantastic mix of Goldfrapp, Kraftwerk and Robert Fripp.” The Electricity Club

“Evidence of no-man changing and evolving into something new.” The Music Shack

“The long-running partnership between Tim Bowness and Steven Wilson has long shied away from conventional genrefication, but even for them ‘progressive melancholy disco’ is a new frontier. Imagine Pink Floyd mixed with Tears For Fears, by Giorgio Moroder, and you’re in the right ballpark.” Classic Rock, Track of the Week