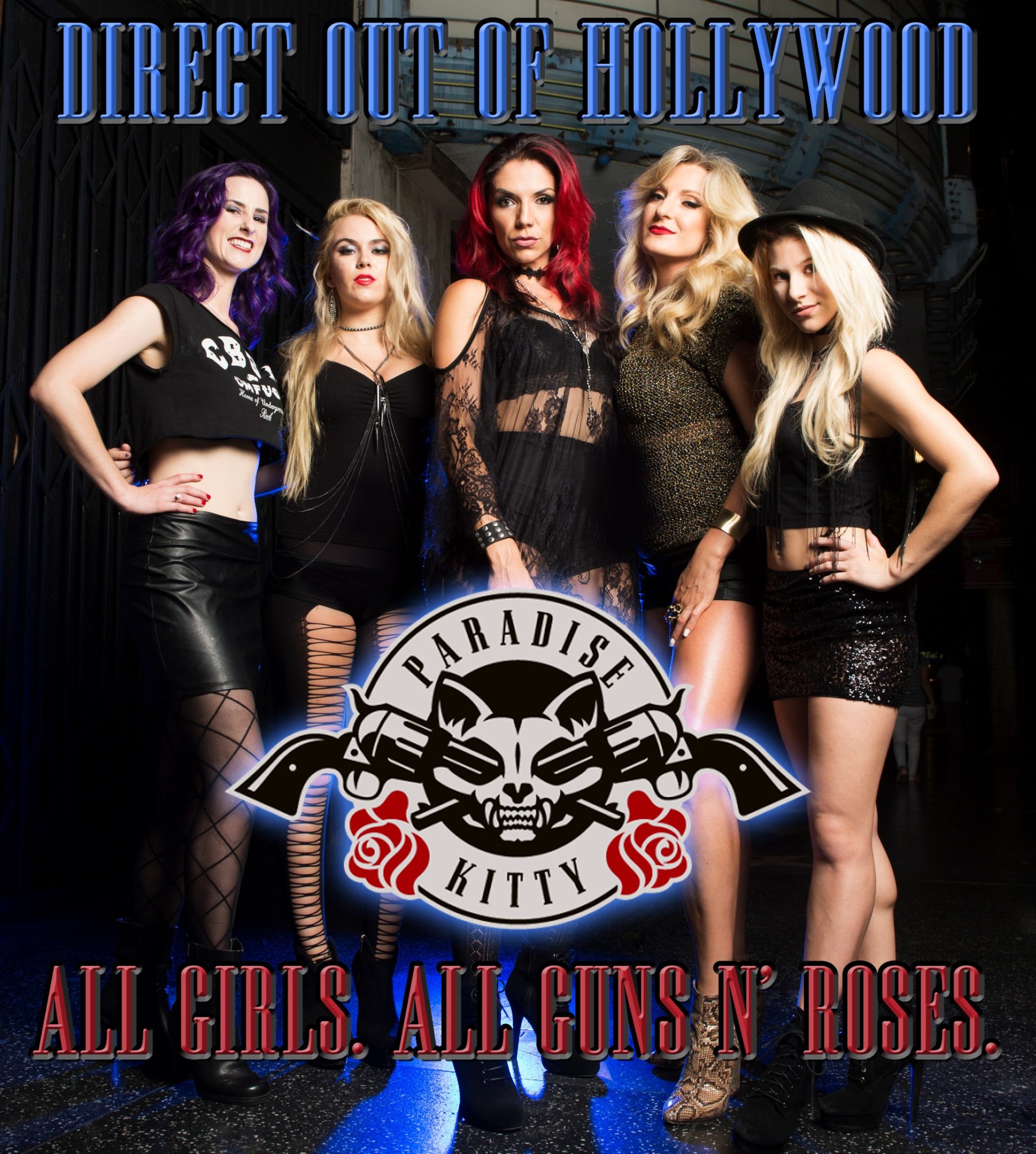 I had the chance to catch up with Rachel Rine, drummer of Los Angeles based all-female Guns N’ Roses cover band, Paradise Kitty. We had a chat about their upcoming Australian tour, the history of the band, and what it’s like being in Paradise Kitty.

J: Your band Paradise Kitty are heading over to Australia soon, are you looking forward to it?

We are so excited, it’s going to be awesome. None of us have ever been to Australia before, so we’re all super excited. We have a lot of fans down there that have been asking us to come down there for a while, so we’re super excited to go there, see some friends, play some shows and have a really good time.

J: I’m sure you’ll love it, there’s a lot of Guns N’ Roses fans over here. Are you going to be playing shows back to back, or are you going to have some time off for a bit of sightseeing?

We have a couple of days off in Sydney, and one day off in Brisbane. We also have one morning and one evening free in Melbourne, so I’m sure we’ll use that time to do some sightseeing and get over our jetlag.

J: Is it ever tricky playing in an all-female line up?

It might have some challenges that you wouldn’t face in an all-male line up, but in all reality, I’ve never been a guy in an all-guy band, so I can’t really compare them. I’m sure there would be different difficulties and benefits both ways. I’ve had people ask me about being a female musician in the past, and say stuff like “Things are so easy for you, doors just open themselves”, and my response to that is that for every door that opens, there’s another one that slams in my face because I’m a female, and I’m sure it works the same way for men. I try not to focus on that, this is the best possible job I could do, so you can’t focus on the negative things people say. I’ve been touring in bands for a long time, and I’ve definitely seen the change of stance for women in the music industry.

That’s a really hard question to answer because at different times I have different favourites in that moment. We are really blessed with an amazing catalogue of songs to choose from, when I’m playing I just try to play each song at its absolute best and enjoy each song for what it is. I can’t really say there’s any one song in particular, each song has its own vibe and its own life.

J: How did the band originally meet and come together?

We were mutual friends through Jenna, our singer. We all discovered that we really loved Guns N’ Roses, and one of Jenna’s friends called me up and asked If I wanted to start up a guns and roses cover band. I knew that the Guns N’ Roses reunion was gonna happen, even before it was announced, and it just felt like the right time to do something. I agreed, and then we all met, it was like putting chocolate and peanut butter together, you just couldn’t stop us moving forwards.

J: As for plans of recording, would you ever do something like record the Guns N’ Roses albums from front to back?

I think that would be really amazing, but there’s a lot of logistics with copyright that would have to be cleared before we could do anything like that. Every once in a while, when we get the urge, we go out and play albums back to back at live shows. The audience love it, it works really well. They’re such well-constructed albums, they work so well like that, especially ‘Appetite For Destruction’.

J: So will you be playing ‘Appetite For Destruction’ in order on the Australian tour?

I’m not gonna answer that question, you never know what we’re gonna play *laughs*. We’ve got to leave some mystery in there these days.

J: I guess we’ll just have to see when we go to the show then! What’s the craziest thing that’s ever happened to you on tour?

I’d love to tell you about some of the off stage shenanigans, but there’s a code to the road. What’s happens backstage stays backstage. On stage it’s not so crazy, but one of our favourite things is when kids come out to the shows and they’re singing along. Jenna loves to bring them up on stage and get them to sing with us, that’s always so exciting to me, it’s amazing. We’ve even had a few kids come up who are learning guitar and they play a song with us. Every once in a while, we also have friends join us on stage, and that’s also really fun. It’s so special to be able to give kids that opportunity and to inspire them, seeing the smiles on their faces afterwards is absolutely priceless. I think it’s important for kids to know art and music, so if we can inspire them in anyway, that’s what we aim to do.

J: What would you like to say to people who might not have heard of you guys before, but are fans of guns and roses?

If you love Guns N’ Roses, but you haven’t heard us, I’ll just say that most of the members of Guns N’ Roses are fans of what we do. They’ve given us the thumbs up, so if that’s not enough to convince a guns and roses fan that we’re cool, I don’t know what is. We don’t get up on stage and try to look like the band or anything, we get up and we play the song really well, we do the music justice, and we throw a really fun party. We even have people who don’t really like guns and roses become fans of us because we have so much fun at shows. If that’s not enough for you, and if you don’t like having fun, then you can stay home and be a square. *laughs*

You can catch Paradise Kitty in all major cities this September. If you’re a fan of Gun N’ Roses and having a good time, I suggest you grab your tickets now, so you don’t miss out on this fantastic, smouldering, dead serious tribute act to the one and only Guns N’ Roses. 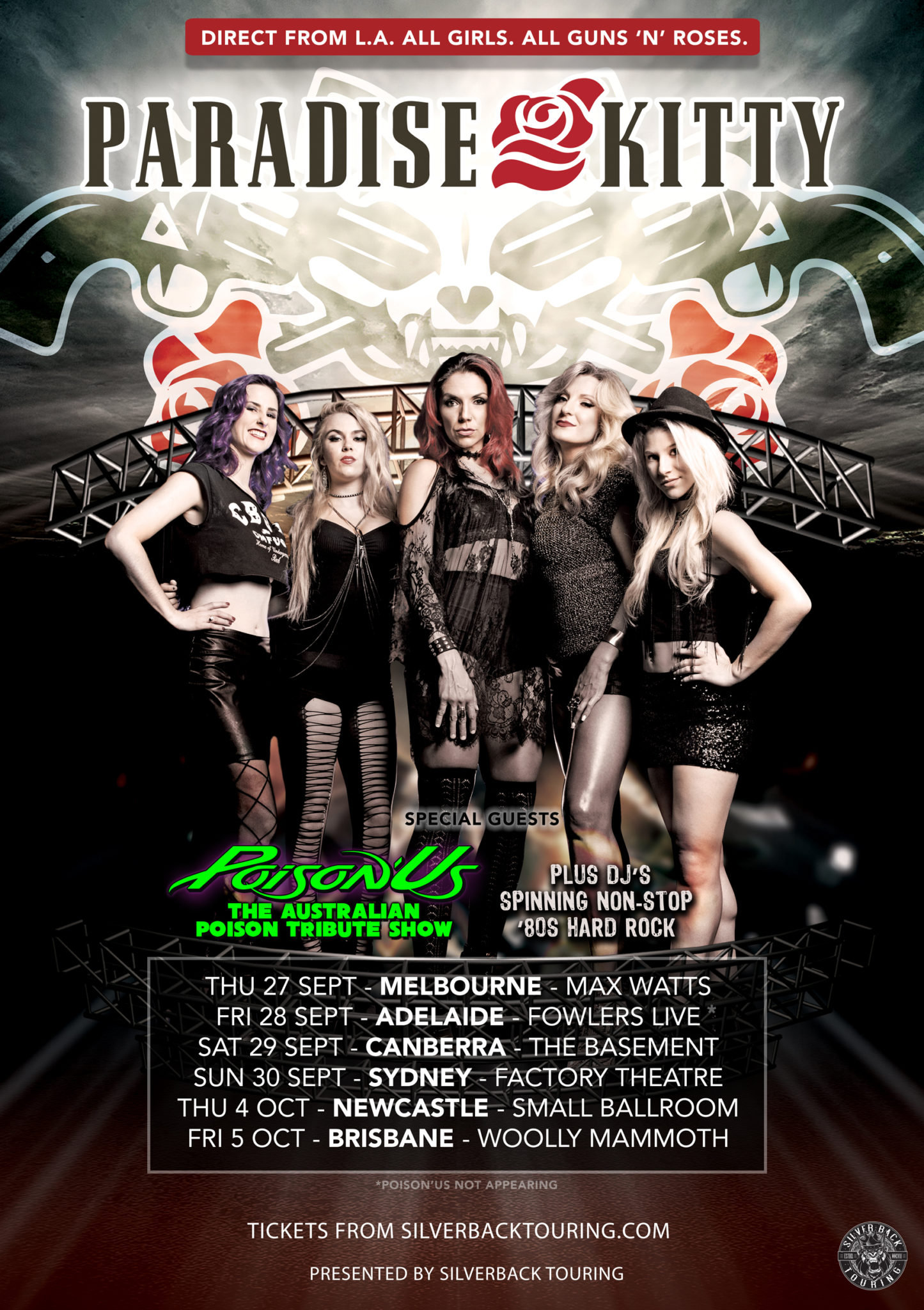