Hexenhammer is the name of the band’s debut for Nuclear Blast. A stunning interpretation of classic metal themes overlaid a thoroughly modern sounding heavy metal assault, the album is far more than a tribute to Slayer, Iron Maiden and Judas Priest.

Asked for her thoughts on how she would describe the song writing across Hexenhammer, this is what Frischknecht has to say.

The album art of the year so far, Hexenhammer features a gnarly sorceress casting a spell to invoke the bands musicians. Stunning colours bring the scene to life.

“The album cover turned out really well because the Hungarian artist, he is a wonderful artist.  and then the week I’m out with the idea of Hexenhammer is something about history. We thought about a lady opening the book of Hexenhammer. Once you open the book, the soul of the witches is coming out.”

Nuclear Blast sign bands that are professionally motivated, comprising excellent musicianship and worthy songwriters; what was the process for Frischknecht and Burning Witches to join the Nuclear Blast roster?

“First we didn’t expect that we will get signed because everybody knows Nuclear Blast is big record label. It’s also a dream come true for us. And then who, who would ever think about that and were just really surprised. We are really grateful for this thing happening because they believe on us, our potential and our abilities as an all-female band. We’re really thankful for that and so excited the work with them. The good things will happen being as a part of Nuclear Blast family. It’s a dream come true.”

Burning Witches are an excellent example of young musicians recognising the legacy of established artist and incorporating their own sound. The band will surely be a festival favourite based on the quality of the cuts contained on Hexenhammer.

The new album Hexenhammer from Burning Witches will be released on November 9th, 2018 via Nuclear Blast Records. 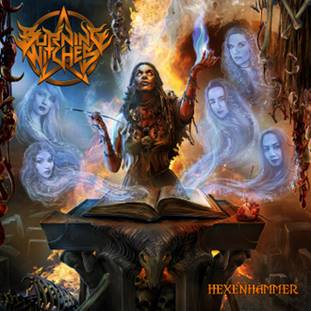 Annalisa Fernandez is the artist better known as TRQS, a truly gifted singer and songwriter …

Jet-lagged and in Japan a week ahead of the November 2018 shows in Australia, DJ …