I had the chance to catch up with a real life musical iron man the other day, the humble yet powerful, one and only remaining original member of worldwide sensational English rock band The Animals, I am referring to the legendary John Steel; and we chatted about the bands upcoming Australian tour, their previous experiences here down under, what The Animals’ original Lead singer Eric Burdon is up to these days, and what it feels like to be the Rock n Roll Hall of Fame.

J: The Animals are heading to Australia soon, and you’ll be playing at The Gov in my hometown of Adelaide, are you looking forward to it?

Oh, The Gov! It’s a great venue. We did two shows at The Gov a couple of years ago, and we had a great time.  We’ll be playing two nights in a row again this time.

It was a fantastic line up in the old days, I do miss the others sometimes. You know, things change, people move on. I’ve got to say though, the current band is the best band I’ve ever played in, since the original line up. It’s a really enjoyable life for me, playing with this lot. It’s a very tight band, we get along really well and have a lot of fun. I’m just enjoying myself, I can’t believe how lucky I am.

J: Is there a reason that Eric isn’t playing in the band anymore?

Eric’s been playing on his own for a long time now, he’s living in California. He’s been trying to establish his own name as a brand name, so that’s where his passion is. He’s not really interesting in being part of a band anymore, he wants to be his own man.

J: So you don’t think you’ll have a reunion tour or anything with him later down the track?

It would be nice, but I don’t think it’s going to happen. Eric’s determined to do his own thing at the moment. It’s a shame really, I think the best he’s ever been was with the original band, I don’t think he’s ever managed to reach that peak again in all these years. But he sure is trying, good on him!

J: Have you got any fond memories of playing in Adelaide in the past?

Well, The Gov is a great pub. Last time we were there we had two nights sold out, and we had a brilliant time. We’re all really looking forward to coming back again. We enjoy playing all over Australia, the hospitality and the atmosphere, the weather, the food, the wine, everything’s lovely about Australia. You’re lucky people over there.

J: What’s planned next after this tour?

Well, we’ll just keep touring. We’ve already got a lot planned for next year, we’ve had a lovely time touring around Europe this year. We’ll just keep playing and having fun. Straight after we play Australia, we’re going to a couple of gigs in Tokyo. It never ends, it’s really great fun. I’m so lucky to do what I do, I really love it, I have so much fun. I don’t know what I’ve done to deserve this life.

J: You have released a lot of hits, but out of your whole discography, do you have a favourite song?

I think it’s probably the obvious ones. ‘House of The Rising Sun’changed our lives, it was a massive hit all over the world. ‘We Gotta Get Out of This Place’was an anthem, people sing it when they’re graduating school and things like that, it’s a party song. There’s so much awesome stuff that we’ve done. We’ve just resurrected a bunch of the old chart toppers from the original Animals, ‘Night Time is The Right Time’has become a crowd rabble raiser in our set recently. Our front man Danny Handley is such a brilliant musician and lead man, he’s a jukebox of the old hits, but he’s so young, he’s only fourty, just a kid *laughs*. He keeps delving into the old material and wanting to refresh it, which is awesome. We keep changing up the set, we always do the obvious big hits, but there’s a lot of other lesser known tracks that we like to throw in to keep it fresh.

J: You guys were inducted into the Rock n Roll Hall of Fameback in 1994, which is such an achievement, how did you feel when you first found out that was happening?

Oh, it was terrific, such an honour. When we started out back in the fifties, Eric and I were the founders of the band, we were fifteen years old. Both of us were hugely influenced by American movies and book, and especially music. We were inducted into the Rock n Roll Hall of Fame, and we were surrounded by all of these people who had inspired us for years, they were our heroes, and then we were a part of them. It was such an honour, it was a lovely occasion. At the ceremony, there was the house band from the David Letterman show, and anybody who wanted to could go up and play some songs with them, it was a lot of fun. There were no egos, everybody was in the same game, to enjoy themselves and play music. We’re such a lucky generation as far as music goes, it was a lot of fun.

J: Did you have any final messages for your fans in Australia?

We’re all really looking forward to having a great tour, we had a wonderful time last time. A lot of fun and really nice people, what more could we ask for? We can’t wait to see you all.

Catch John Steel and The Animals at this November! You can keep up to date with the band via their website and don’t miss a thing. Gets your tickets now, because they will sell out! This is set to be an amazing show, full of fun, dancing, and a hell of a lot of hits! 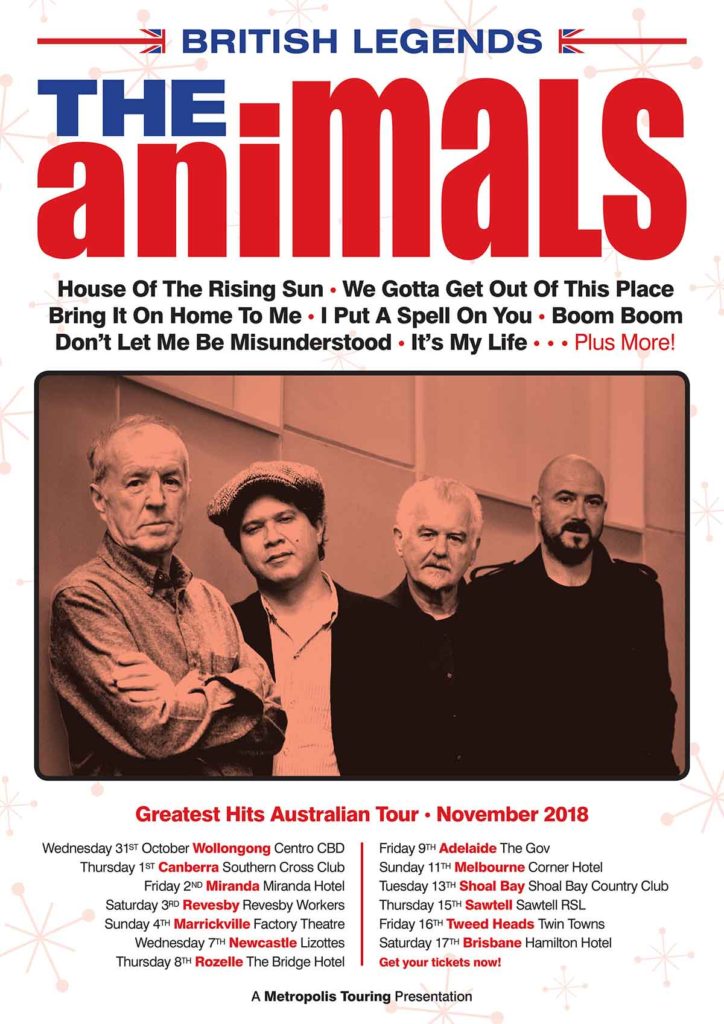 Ritchie Neville is the spokesman and foundation member of British ‘boy band’ Five. The outfit …