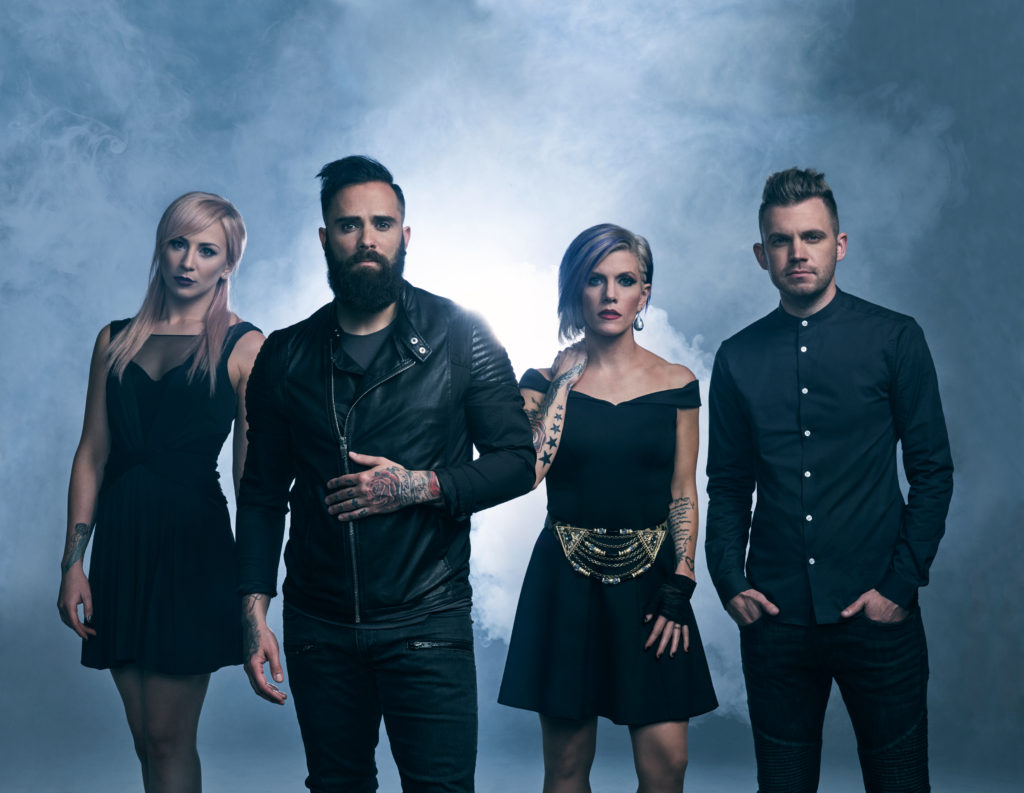 I had the chance to catch up with John Cooper, front man of well-known Christian rock band, Skillet. We spoke about their upcoming Australian tour, the new music that they’re working on and their recent nominations for two Grammy Awards.

J: You guys will be heading to Australia very soon, are you looking forward to that?

Yeah, we’re very excited to be coming back. The last time we were here was about six years ago, so it’s about time. Last time we were over there we had a super amazing time, it’s one of our favourite tours we’ve ever done. Every time my wife Korey gets asked about her favourite place to tour in interviews, she always says Australia. There were fantastic crowds at all of our shows, we had no idea that we had so many wonderful fans in Australia, I’m so glad we’re finally coming back.

J: Where was your favourite city to perform last time you were here?

To tell you the truth, I don’t know, I loved the whole run. Sydney was awesome, but I don’t think I had a favourite, the whole experience was beautiful.

J: You guys have been nominated for two Grammy Awards and you won a Billboard Music Award.  How does that feel?

That was amazing, I didn’t really believe it at first. The first time we got nominated, it wasn’t even a super successful record, it did well, but it wasn’t our best. I’m not sure how it happened, but it was wonderful. People have started to look at us differently in the industry, some artists are fortunate enough to be adored in the music industry, and then other bands don’t. Like our band Skillet, we’ve never had that sort of street cred, it’s usually been the opposite. It’s usually a shock to people that we’re still around and that we’re doing so well, even to myself sometimes, but it was such an amazing feeling to be nominated for such an honourable award.

J: Your last album ‘Unleashed’ came out in 2016, have you got any new music in the works?

Yeah, we do. We’re about seventy percent of the way through writing our newest album, which is going to come out next year, and we’re very excited about it. I think the songs are really great, it’s very anthemic and symphonic, and needs to be played in arenas full of people. We don’t have a name for it yet, but we’re making a lot of progress on it. I think that should be out around the middle of 2019.

J: What are you doing differently on this new record compared to previous releases?

It’s a little hard to say because we’re not finished yet. Sometimes I’m surprised by how much a record can change in the final steps of production, with Unleashed, we decided to add another song to the record in the last couple weeks of production. It’s a little early to say at this stage, because the songs could still change quite a bit from here. We’ve written about thirty five songs, and so far we’ve chosen seven for the new record.

J: Where does the name ‘Skillet’ come from?

We chose the name ‘Skillet’ because when we first started, we were all in different bands, and somebody said to me ‘John, you could be good with a guitar player from anotherband’ so I got together with some people who were all in other bands, like a super group, even though we weren’t super, nobody knew our bands. He said it’d be funny if we took all these ingredients from different bands and threw them all together in a Skillet, and that’s how it started.

J: Have you got any fond memories from the last time you toured Australia?

I remember loving the food. The first time I came to Australia, in 2001 I think, was the first time I ever had Avocado, which I now love. It’s funny, Avocado is really popular over in the US now, it’s Avocado everything, but it wasn’t like that back then. I’d never even heard of it before, which would be unheard of in Californians today. On the last trip there I had a really wonderful time because the weather was so nice and we had about five days off, so we got to walk around, explore and enjoy the weather. I think between that and the excitement of the crowd, those are the things that I associate with Australia. I tried Vegemite too, which is really disgusting *laughs*I think you have to grow up with it to appreciate it. I’ll never forget it though.

J: What can we expect to hear in your set list for the Australian tour?

We won’t be playing any of the newest stuff, it’s a little too early for that. We’ve had two album come out since we were there last, so we’ll be playing a lot of music that we haven’t performed in the country before, which will be cool. We’ve also a big catalogue that people will want to hear, but I always add some surprises, I try to play songs that people aren’t expecting. I like the live show to be different than just listening to the record, so there will be some surprises here and there.

J: So do you mix up the songs a bit and play them slightly differently to the recorded versions?

Yeah, sometimes I like to add some little parts, or play things differently, or connect songs in a different way. People always say that there’s a lot of surprises in the show, one way or the other. I like that, I think a show should be kind of theatrical and leave you wanting to come back again.

J: What sort of music did you grow up listening to and how has that influenced your writing style?

I grew up listening to metal and hard rock in my childhood and teen years. Everything from Metallica to Bon Jovi, Michael Jackson to Prince, it was a really broad palette of music. My real passion was metal and hard rock, especially Motley Crue. It’s not necessarily an audible influence on Skillet’s music, but it’s definitely a background muse. I grew to love the classic arena rock of the seventies and prog rock, Bands like Fleetwood Mac, Journey, and Yes, and more. Because of that there’s a real theatrical side to Skillet, and an orchestral side too. I’m always being inspired by different music every day, so it always changes as we grow. Bands like Linkin Park, Breaking Benjamin, all of those bands too.

J: The band has been together for over twenty years. What’s the key to the band’s longevity?

I think that the number one thing is treating our fans well, and giving them what they want. You’ve got to give them your best show and treat them with kindness, signing stuff and meeting them, hearing their stories and making friends on the road. That’s what’s really important, because the music is really about people, it’s about making music for people. Secondly, Skillet has always been very authentic, it’s important to stay true to who you are and where you come from, we’ve never been embarrassed by who we are, never tried to change who we are or what we do, or what we believe. We’re not fakers or posers, we’re just doing what we do, and we’re grateful that we’ve been able to make a career out of it.

J: What is it like being in a band with your wife?

*laughs*Being in a band with Korey is awesome, we’ve been lucky, we’ve been married the entire time the band has been on the road, we have two kids that have toured with us all over the world since they were born. We’re very lucky, some married couples should probably not work together, but we work very well together and feed off of each other’s passion. Skillet is very much a product of me and Korey together, the sound and the image, it’ from our hearts. It’s hard to imagine it without either of us. It’s had its challenges, being on the road is hard with anybody, there are so many people, so little space, so little rest, it’s tiring. We’ve learned how to be business partners, and also how to be married, and also how to be parents. Some time we have to say “Hey, I’m not talking to you as your Husband/Wife right now, I’m talking as your business partner”. Then we can delve into certain subjects. Sometimes we decide to not talk about business, we just want to be married and relax, and those are good conversations to have.

Catch on tour this November. Grab yourself some tickets before they sell out, this is going to be an awesome show that you don’t want to miss! You can keep up to date with Skillet by following them on social media or via their website. Keep and ear out for new music from these guys in the New Year. 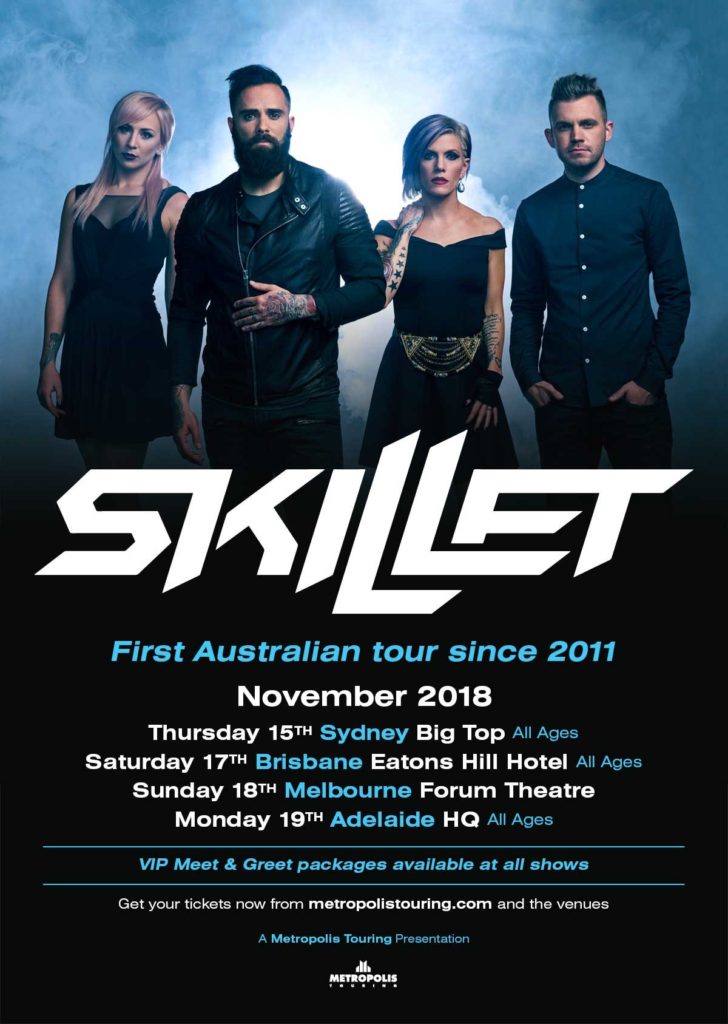