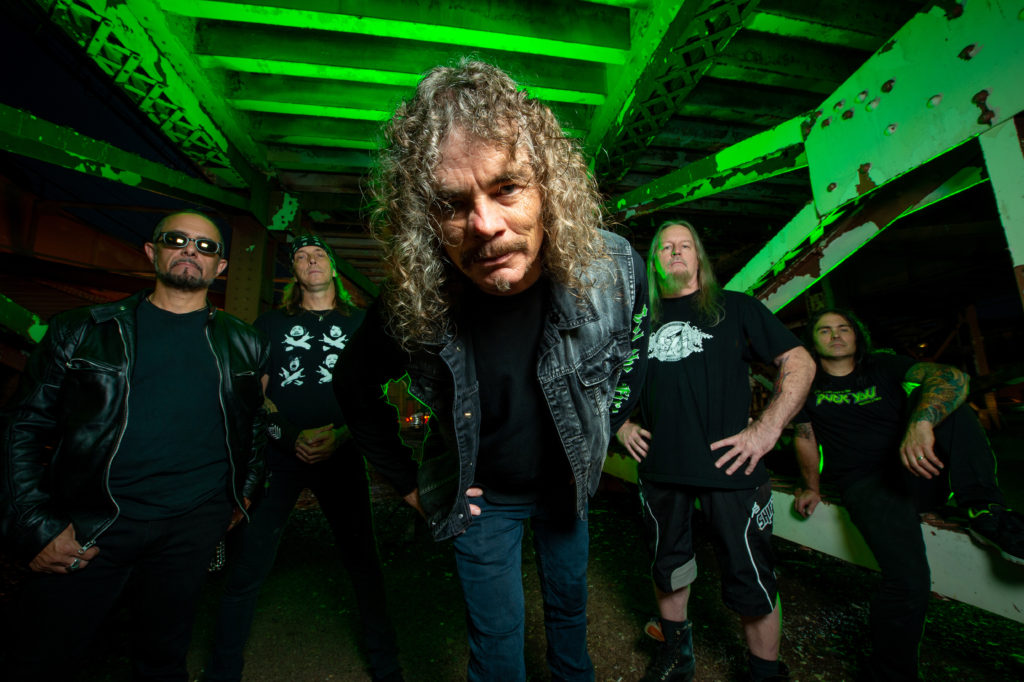 Bobby “Blitz” Ellsworth, Overkill’s vocalist and thrash metal’s response to Brian Johnson (ex-AC/DC), offers the A List an Australian exclusive as he chats about the brand-new studio offering from Overkill for 2019, The Wings of War.

Overkill are the sole heavy metal band that is consistently in the public eye and are yet to offer a genuine misstep; be it an album, EP, tour or anything else designed for public consumption. To refine the point, many metal fans who endured Metallica’s attempt at commercial success through the Black album (’91), would leave that band’s cohort of fans permanently five years later when the atrocious Load (’96) series of albums appeared. Slayer fans ignore the underwhelming Diabolus in Musica (’98), due to the bands take on the burgeoning nu metal of the era. Megadeth offered Risk (’99), a truly appalling album and a likely candidate for the worst album ever produced by any of the ‘Big 4’; and Anthrax? Well Anthrax have had many changes in the vocalist role resulting in a patchy catalogue and the band stoically refuse to perform material from the revered John Bush era (’92-‘05). A massive omission since the era included collaborations with Dimebag (RIP) and Anthrax’s most consistent album, The Sound of White Noise (’93).

Elsewhere, Kreator have their Endorama (’99), Destruction almost did that to their career when bassist/ vocalist Schmier left and fans didn’t know where to look as guitarist Mike Sifringer forged ahead through the now-disowned ‘Neo-Destruction’ episode in the nineties, Sodom never veered from the left-hand path yet there are many albums in their cannon of work that fans overlook, and they offer the worst album cover from any of the mentioned bands due to the completely batty cover art adorning ‘Til Death Do Us Unite (‘97). Testament get a ‘Distinction’ as far as the writer is concerned however many fans pillar The Ritual (’92) for its commercial appeal. Exodus, Annihilator, Tankard, Metal Church… all the greats, and all have their less inspired moments that were played out in public. By now you get the point: All seriously acclaimed heavy metal bands from the same era have had their moments, all except for Overkill!

That Overkill have consistently delivered the goods since the early eighties is no boast. So, what’s Blitz’s take on the band’s stoic endurance and consistency?

“Well, it was back in the 80’s that they only gave us two years to live, but they just keep moving it (haha!). I think we’re opportunists. I think that we’re the kind of people who put the most into everything we can with regard to this band and it probably carries over to other aspects of our life, but when an opportunity arises, I think you put the most into it and it’s really simple.

We’d rather be writing new material than not. It obviously works for us because it keeps us visible. We’re not the go-to on the satellite radio or (with) broadcasters, but I think somewhere this works for us because it keeps us visible and it also keeps us fresh. It’s not a matter of ‘Well, what did we do on that record 10 years ago?’ It’s more like, oh, ‘What did we do two years ago?’ and let’s try not to do that. Let’s try to do something that’s a little bit more out of the box for us. Which, uh, I think we got on this one”

The Wings of War is unmistakably Overkill yet it has an urgency in the song writing that has been seriously precision tooled above the band’s usual epic standards. Razor-sharp production gifts the songs an extra dose of speed as the bands signature groove (see: “Head of a Pin”) achieves Ferrari F40-esque white knuckle intensity.

The drum and percussion sound is industrial strength. The recently arrived Jason Bittner (Flotsam and Jetsam, Shadow’s Fall) must have made a contribution of merit. What’s Blitz’s thoughts?

“I think we actually inspired each other, and the reason I say that is because we played a year live with each other prior to recording, which is, you know, that it’s invaluable experience for both. And then we get to know him, and he got to know us. I think the changes that are made in studio when recording are anticipated based on what you know of the other.

When we started doing demos for (The Wings of War), Jason was the hardest working one on the demos. I guess that’s as it should be as he’s a new guy, you know, if he’s the one who has the excitement and then spreads that fire to everyone else. He was sending me, DD (Verni- Bass) and Dave (Linsk- Guitar) you know, six, eight different cuts of each song. ‘What do you think of this? What do you think of that? I changed this since the demo.’ We’d say, shit, we’re going to have to embrace this change man and that will be what the chemistry changes, is that he’s changed to us, so we’ve changed the him and therefore one plus one plus one equals the new Overkill.”

Blitz and Overkill have been warmly embraced by Australian fans. Well attended shows and a fan base that covers all ages and backgrounds, Blitz is certainly enthused about the bands reception in Australia.

“You have a certain bravado about yourself down there. You know, there’s a certain type of friendliness and ‘Welcome to Australia’. It’s probably the only place in the world that reminds me of Texas and whenever I get there, I always feel like I’m amongst the friendliest people… but for God’s sake, if I fuck up once I’ll get taken out behind the woodshed, I’m looking at here, one gun, one gunshot! (haha)

What I’m saying in a very roundabout way is that I respect that very much that you’re a people unto yourself on your own. A very, very big island and you make foreigners feel super welcome. I mean, you know, and I think that if anybody has anything in common it’s the east coast yanks!”

Cue more laughter… and that reader, that is what makes Blitz such an endearing personality and interview subject!

The Wings of War is out via Nuclear Blast on 22nd February 2019. Pre-order here. 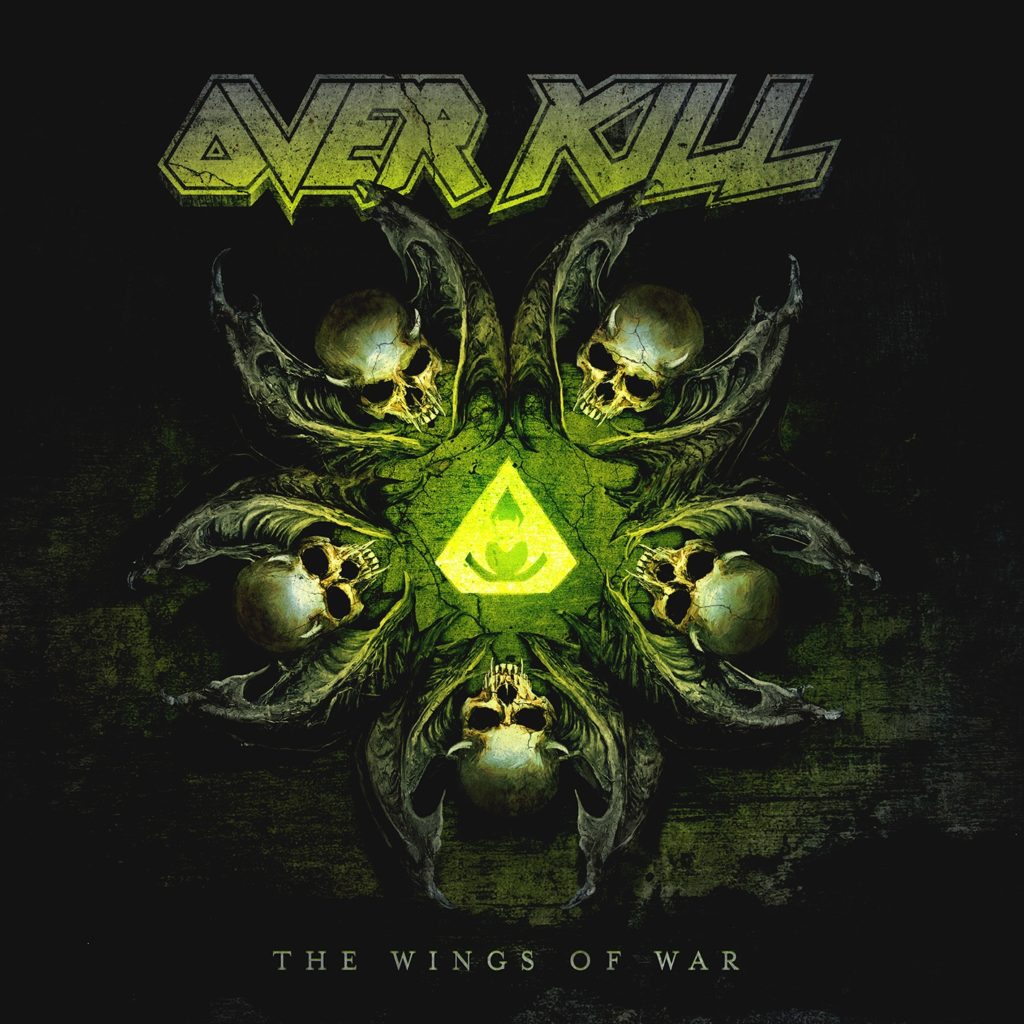