Are Beast in Black just another European outfit pedalling standardised power metal that’ll do great business in Germany? No. Well, yes… they do well in Germany however this is engaging material that is doing well with fans of metal across the globe.

From Hell with Love is the brand-new album for 2019 from Beast in Black and it is the sound of a band with something to prove. It’s no small compliment to suggest that the band and the album are worthy comparisons to Nozomu Wakai’s Destinia, and their epic Metal Souls album from 2018 which features a cast of world class musicians.

From Hell with Love offers the listener ABBA style melodies atop a ferocious guitar arsenal spearheaded by Battle Beast foundation guitarist Anton Kabanen. Joining The A List for a conversation ahead of the release of From Hell with Love, native Finn Kabanen is in a mood to discuss a broad range of subjects including his thoughts on new album, the controversial tour with W.A.S.P. and Battle Beast.

Beast in Black’s debut, Berserker (’17), was widely praised. Expectations therefore are high for a positive reception for From Hell with Love. How does Kabanen feel ahead of the album launch?

“It’s very rewarding. I’m trying to see this whole picture, looking at my own career when I started, when was the first time that I wanted to have a band and you know, get a record label and so forth.

Battle Beast to me nowadays looks like… it was cool and now with Beast in Black we’re like finally, now we’re really… this is the real-deal, finally getting to do this this way and it’s going well and it’s very rewarding. So, everything that happens in life, it’s just like a turn on the road, you know, or a bump on the road. It doesn’t stop you on your journey. So that’s how it feels now. The journey is like going on and we have like a nice pace. It means that there’s a lot of gigs and good feedback. Lots of views on YouTube and what any band would like, what any bad dreams about. It’s slowly happening and growing up and I hope it stays that way, you know, it’s still just the beginning with Beast in Black on this second album.”

The 2017 tour with W.A.S.P. was anticipated as a stellar musical partnership for fans of heavy metal. It turns out the experience bade for a cautionary tale that the members of Beast in Black could offer any emerging band or artist.

“The W.A.S.P. tour? Well, I don’t know if you heard the whole thing, the tour ended quite soon, it was supposed to be like a month-long tour… You know, the tour ended, and the reason was (W.A.S.P. frontman) Blackie Lawless basically.

Nowadays, we all really laugh about it because it didn’t stop us and it was a bump on the road, but back then it was like very… everyone felt very bad and like frustrated. But that happens, you know, he has a reputation, I guess I could say he kind of lives up to it, you know, there were difficulties like since day one on the tour, weird behaviour from them and all kinds of ridiculous demands and decisions… how they are treated the support band. “

Given the obstacles presented through a less than acrimonious split with Battle Beast and the episode with Blackie Lawless and W.A.S.P., Kabanen has had to be resilient.

“You gotta know your destination. If you don’t have a goal, where you want to go, then you are like a ship without a captain, drifting around and never ending up anywhere. When you have something… that’s a great source of emotional power, like a strength, and that keeps you going on. But it’s not easy. It’s hard. I’m not telling that it’s easy, but you if you didn’t have some kind of a goal or a passion for something, then you could have much more devastating results when you have these setbacks. And of course, if you have a family to support you and friends there with you, like true friends… a big thank you for all of those people.”

From Hell with Love is out via Nuclear Blast on February 8, 2019. 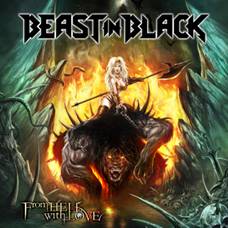 NWoBHM originals Raven are all set to tour Australia in June alongside Venom Inc. and …

I had the chance to catch up with Rachel Rine, drummer of Los Angeles based …